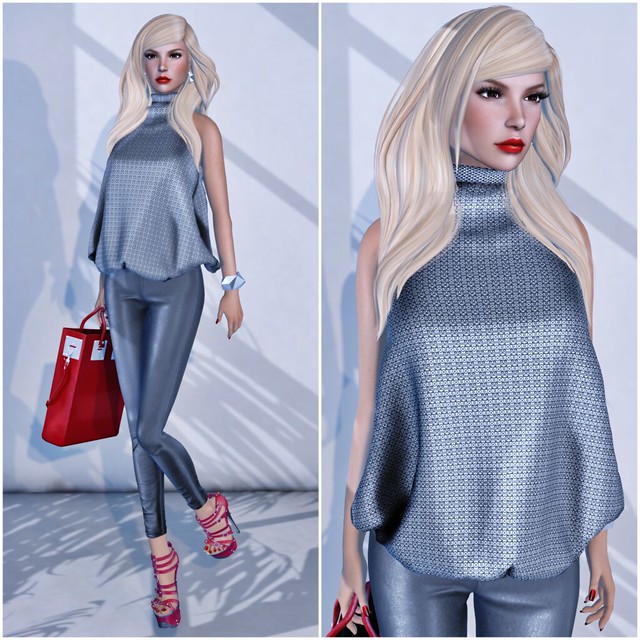 I picked up this really cool jewelry from LaGyo at Collabor88 this month.  Mirte is available in Silver, Black, Bronze, and Gold.  I’m wearing the Silver which I tinted it blue for this metallic blue look.  I purchased the silver fatpack, but only the bangle, necklace, and mask (not shown) were modifiable so I was able to tint.  If you like the look in other colors and want to tint as well, be aware you wont be able to tint the earrings. If you’ve never tinted things before, I have quick tutorial here. You’re welcome cause this necklace is fantastic in tons of colors.
Erratic just released the Estelle Panel Dress.  This dress looks so cool, but good luck picking out a color.  It’s available in 9 colors, and 2 color blocks. You won’t want just one!  Exile’s Baby I’ll Rule hairstyle is new and a fun, soft big hair. I love the waves! Slink’s Hera Wrap are a perfect shiny, modern fit for this look, and are made for Slink’s Avatar Enhancement Feet – High. I’ve also styled in Cherry’s Viola Leather Shopper in Royal Blue, and a latex blue manicure and pedicure from Set 87 from Flair on my mesh hands and feet.  I’m wearing a variety of blue makeup on my Sadie mesh head from Logo, with blue glitter lips, with drama blue and silver metallic eye makeup.

I’m wearing the new Boys Will Be Boys hairstyle from Vanity Hair released at Hair Fair 2013. It’s a high volume updo, with bun, that comes down in two pigtails, wrapped with hair, and ending in front and in back with huge a huge curl.  I’m wearing it with Tres Blah’s Frilly Dress in blush from this months Collabor88.  It’s a romantic little sleeveless dress with ruffled bodice and hem, and bow tied to the side.  It’s available in a variety of colors and prints. I’ve accessorized it with LaGyo’s Isabella earrings, and necklace in pale, mesh flowers on gold cord. I’m also wearing G Fields Ribbon Slingback shoes in salmon. They’re nice slingbacks, and each shoe has a menu when you click it to turn the front and back bows off. Making it a really versatile part of your wardrobe.  My manicure is a peach to flamingo pink ombre polish in Set 31 from Flair, I’m wearing it on my SLink Avatar Enhancement Hands, with skin appliers from Izzie’s to match my Izzie’s Jill skin.

The other two hairstyles Vanity Hair released at Hair Fair 2013 are Fantastic Girls, and Sonata. Fantastic Girls is a voluminous pouf that ends about shoulder level with soft barely there curls. It would be great for formal wear. Sonata is an intricate looped updo that frames the head from the back, another great formal wear hairstyle.

Hair Fair 2013 began this weekend with over 80 hair stores participating. There is an amazing selection from fashion forward to fantasy! Men will be particularly pleased to know there is quite a lot of styles for them this year, so grab your guy and shop for a good cause.  Your purchase of any hair styles at Hair Fair 2013 will donate a percentage to Wigs For Kids.  You can beat the lag at Hair Fair by joining the Hair Fair Demo group inworld, and trying on demos in the comfort of your home, before coming to the fair. Vendors are set up to redeliver any hair that you might miss accepting, which eliminates double purchases as the vendors will only let you buy it once.  Just left click the vendor and it will redeliver.

Also available at the fair, are Free Official Hair Fair 2013 outfits, which feature him and her layer clothing, and hair bases from DCNY and Exile. No need for AO’s, just find a bus kiosk and rez a bus to move in edit around the fair, they come in singles, and larger versions for group shopping.  This year the theme is a fun interlocking block build, each sim has it’s own unique color scheme and style so you can easily tell where you are and where you’ve been.  Upon arriving at a landing point, you can chose left or right, follow the path and easily make your way around the fair, back to where you started assuring you of full fair coverage. Many stores also have placed out free gifts, and dollarbies.

I want to wish a ~Happy Birthday~ to Gyorgyna Larnia of LaGyo/LG Concept.  ;D  I’m wearing LaGyo’s Bizarre Flower Headpiece in this bright marigoldish shade. It’s texture changeable, and was featured at a previous Collabor8 event.  It’s bright and happy, and when worn with the new mesh jeans in the So Good print from TuttiFruitti reminds me of my childhood.  (My living room was turquoise and yellow back then.)  It’s a happy outfit, and I found all of the new mesh jeans from TuttiFruitti in happy prints, they’re a brand new release so you should run and grab some demos. I’m wearing Maitreya’s mesh Cupio Top in turquoise and their Esprit XTD shoes.  I’ve kept my accessories simple with a cute canary yellow purse from fri.day, and matching canary yellow nails from Izzie’s available via color change hud, look for her Spring/Summer 2012 Classic nails.

The clock is ticking! Hurry Hurry! Contest closes on the 30th!

Just some reminders, the deadline for the Hair Fair Photo Contest is coming on the 30th of June, so be sure to get your photos entered before then. Tell all your friends, because the prizes are amazing. You will find all the info regarding rules for your pictures HERE . Please be sure to tag your photos and fill in the info asked for, so that your pictures are approved as soon as possible.

Prizes are provided from a selection of these stores:

After a long day of working on Hair Fair 2012 details, I had so much fun getting dressed today with a variety of new and old pieces.  R.icielli just released a collection of mesh items.  Handbags, jumpsuits, skirts, and tops in a large variety of colors.  You have to see the high-waist leather skirts!  Here I have paired one of their minitops in Pearl with a new skirt from Boom available at Collabor88.  The top is made for high-waisted skirts available in the collection, and I think for many of my high-waisted bottoms it should work well.  I was even able to wear it with this cute skirt from Boom, by also using my League vintage chiffon belt.  I heavily layered 3 necklaces, by starting with my most recent purchase of the Agate Slice Necklace from Yummy, which I also picked up at Collabor88.  It’s a chunky pendant on a thin long chain, and I loved the added gems.  I’ve been all over the place shopping this weekend, from Collabor88 to the new releases at The Dressing Room Blue where I picked up this cute hairstyle called Paige from Exile.

By the way, Hair Designers, Hair Fair 2012 applications being accepted!  But hurry the deadline is the 21st of March.  That’s only a few days, and spaces are limited!!  If you know a hair designer that might be interested, please help spread the word!