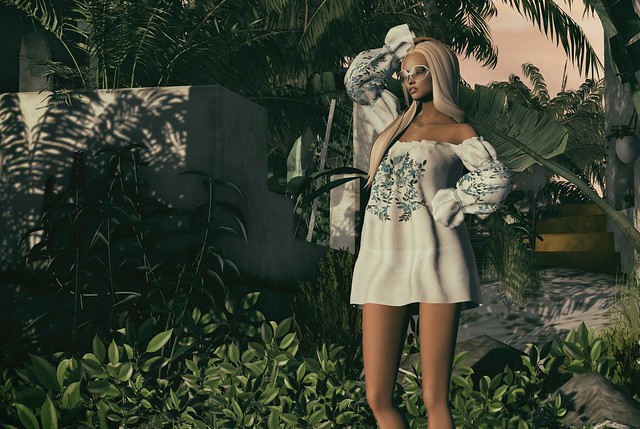 Ysé is a newer hair store in Second life. They’ve released 4 hairstyles at Hair Fair 2017 .  Ysé ‘s hair tones are lovely, and I’m featuring a blonde tone from the Light Blonde pack here. You should definitely take a look at their red, and brunette packs!  Packs include a small and large hair, root version for hair tone, and variations of the style. Favor is a long hair, that runs behind the shoulders and down the back. The HUD allows you to change the length. Ivy is another long hair, and it’s HUD lets you switch between small and large breasts, as well as behind the shoulders, forward, left side forward, and right side forward. Roux is a long slender low pony tail, with tendrils. HUD allows you to switch the side of the pony tail. Emma is another long hair, pulled forward, with banded pony tail and tendrils.  HUD allows for switching sides, and between large and small breast versions. Ysé is located here on the Noirette sim.